New Site for a New Year

Most of this team are returning to soccer for the next season by joining the 10C team. Rather than clutter up this blog site we have decided to move to a new one. Check out our new site at http://briangavin.blogspot.com for news about the 2007/2008 season.

Trial night for next years under 10 teams (i.e. children born in 1997) will be held in Porterstown at 7pm next Thursday 7th of June. The purpose of this evening is a chance to view the skills of new players wanting to join the club as well as to assess if any existing players should be transferred between squads.

It is not mandatory for existing players to attend the trial night. But if anyone does not intend attending the trial, we would appreciate if you could confirm whether or not they plan to play with the club next year.

A narrow defeat in our final match of the season

Our final match of the season was against Dunshaughlin on Monday evening.

It was a lovely sunny evening and all the team played very well. Niamh, Dylan and Zhudi all had plenty of good shots in the first half, but the Dunshaughlin goalie was on top form to keep a clean sheet. At the other end of the pitch Dunshaughin managed to get a lucky ball lobbed over the head of Omar who was our goalie for the night.

In the second half our strong defence team of Frank and Andy was made even stronger by a brilliant performance from Colin which earned him the title of man-of-the-match. However, Dunshaughlin managed to score another goal in the second half to leave the final score at 2-0.

Overall the tam can be proud of a great performance on Monday night and all though the season. We ended up in sixth place in the league which is a great result for our first season together. I am looking forward to next season already. 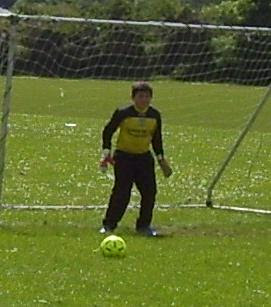 Zhudi played a brilliant match in goal, to be a very deserving man-of-the-match. Unfortunately he saw too much action in the first half and we were lucky to be only 2-0 down at half time.

The second half was barely started when Rivervalley stretched their lead to 3-0. Castleknock fought back bravely and it looked like they might even get back into the game, but Rivervalley scored again in the final minute to leave the final score at 4-0.

We can only hope that Dunshaughlin prove to be easier opposition on Monday next.

Two home matches at the weekend

We have two home matches this weekend.

On Monday May 28th we host Dunshaughlin. Kick-off is at 8pm, so we should meet up at Porterstown at 7:45pm.

We have no match this Saturday 19th of May.

Some bad luck leads to defeat in a high scoring game

We started out for our Maynooth match with great hope, but things started to go wrong early on. The group of cars travelling to the match got separated and we almost lost a few players. Luckily things got sorted out and we were all at the pitch in time for the kick-off.

We started off the match strongly and has several good chances early in the game. However, the referee awarded a penalty against us in a very harsh hand-ball decision. Maynooth slotted the ball into the corner of the net to go in front.

Castleknock continued to dominate the exchanges and it seemed like it would only be a short time before we got an equaliser. However, our luck turned even worse when twice in a row Maynooth shots were deflected off defenders to slip past Andy to give Maynooth a three goal lead. This run of bad luck seemed to knock our confidence and Castleknock lost concentration. Maynooth took advantage of that to score two more well deserved goals before half time.

Gavin gave a inspiring half time speech so the team came out much stronger after half time. Nado, Niamh and Niamh strung some great passes together and then Omar scored a great goal to leave the score at 5-1. Maynooth were quick on the counter attack and managed to stretch their lead to 6-1. However, Castleknock did not let this lead distract them and they continued to attack strongly. Omar managed to get a further 2 goals to complete his hat-trick.

All the team played well, and I was especially pleased to see that the passing is getting much better. The man-of-the-match award goes to Frank who had a great game in defence.